Meet the Newest Member of Our ﻿St. Matthew Family! 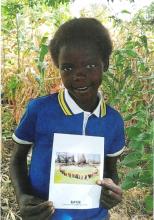 "Every good and perfect gift is from above, coming down from the Father of the Heavenly lights."  James 1:9

A pastor in Oklahoma City was delivering a message on the topic of unity to his congregation of approximately 1000 worshippers, some who were there worshipping in-person as well as those who were attending through the church's video streaming service. The pastor was preaching about how easy it is during the 21st century for Christians to live separate lives, and, as a result, fail to see the need to live in unity with others.

To make this illustration, the pastor gave the example of how instead of going to Wal-Mart and interacting with other humans, all one needs to do these days is say, "Alexa, order toilet paper", and the problem is solved.

Surprisingly, an Amazon Echo of one online parishioner heard this voice command over the homeowner's speaker and responded by placing an order for 60 double rolls of Angel Soft toilet paper in the owner's Amazon cart.

Joking, the woman sent the bill to the pastor stating, "You owe me $28!"

The pastor responded, stating, "Next time I am going to say, "Alexa, make a donation of $500 to Memorial Road Church!"

Alexa, Siri, Google - they know a lot but they only know what they are programmed to know. They can't know more than their designer. In the same sense, God has also given us a lot of abilities and knowledge, but God is so much greater! Only God is omniscient and knows all. In God's wisdom, He knew which World Vision child was going to select St. Matthew Lutheran School as his/her sponsors. Today this information was revealed to us as well!

It gives us great joy to announce... IT'S A GIRL!

Our sponsor child's name is Mayeya. She is 8 years old and lives in Zambia. She likes to draw and attend church. She would also like to be a teacher when she grows up. Mayeya also said that she selected our photo because she like the symbol of love we made in the heart picture!

St. Matthew Lutheran School now has two children that we sponsor! For the past seven years, we have been sponsoring Virginia, who is now 14 years old and lives in Indonesia, and now we have Mayeya as well. To help everyone remember to keep these girls in their prayers, Mrs. Yeskie made a book mark for every student to put in his/her Bible that contains photos and names of both girls.

We are so excited to have Mayeya become a part of our St. Matthew family, and we look forward to many beautiful memories together!

In His Love,
Mrs. Palka